Thomas had married a woman from Kariyun named Mandy and had twins named Zach and Cleo. Thomas originally lived with his mother at a house near the Phaeruti Marsh. His mother eventually died after a fall. She was frail and elderly and Thomas was in his mid 20's when his mother fell. On their way to Kariyun, Thomas had to get a horse and use it to take his mother there. When they were almost at Kariyun, Thomas's mother fell off of the horse when a wild monster attacked it. Thomas killed the monster and came to his dying mother. He told his mother to hang in there and they're almost to Kariyun. When they reached Kariyun, Thomas's mother was at the brink of death. People gathered around Thomas and his dying mother, including Mandy, who was a store keeper at the Kariyun mall. Soon Thomas's mother said that she loves him very much and will never forget how well he took care of her and died in Thomas's arms. Soon Mandy came up to the mourning Thomas and comforted him. She even confessed her love to him and was a teenager when she wanted to confess. Soon Thomas and Mandy got married and Thomas's mother was taken to Ishtar to get mummified. The people of Ishtar made an altar for Thomas to honor his mother to put next to his Kemetic Altar.

Thomas is first introduced when the party reaches the end of the Phaeruti Marsh. The party is snaked by a giant centipede and Thomas uses a move on the centipede, cutting it into pieces. Zulis and Thomas had known each other and Thomas invites the party to his house. He joins the party after the centipede is defeated.

Thomas has naturally white hair and brown eyes. He wears a red do rag, a sleeveless button down shirt, a belted vest, long fingerless gloves, and his mother's necklace. His mother gave him her necklace right before she died. Thomas is mature, kind, and fatherly. He's also stern. 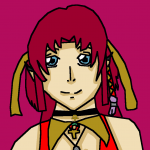